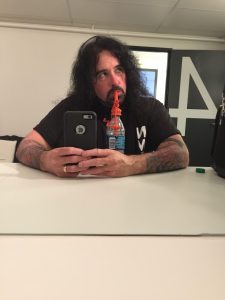 After two years, I guess I can come clean…During the summer of 2014, while performing on a television show in Tokyo, Japan, I had a shard of wineglass pierce the back of my throat as the glass exploded in my hand from the sound of my voice. It felt like a terrible bite and I could taste blood, but I ignored it, smiled, and went on, as we were in the middle of filming. Later that night in my hotel room, I yawned wide, looked into a mirror, and could see what looked like a cut in the back of my mouth. Ah, the dangers of shattering glass with your voice, but least the worst is over; or so I thought.

Fast forward to March of 2016, I was at my wits end. Having spent nearly two years dealing with issues from that one incident, I had become a complete hypochondriac, being checked for everything from glass still embedded in my pharyngeal wall to candida to acid reflux, yet nothing checked out. Repeated X Rays, MRIs, every test and exam I could think of, nothing showed signs of reflux, nodules, cancer,  polyps, or glass remaining in my throat..nothing. Various doctors made claims from bad tonsils (which I had removed at age three) to residual effects from a tiny piece of glass still embedded in my pharyngeal wall, to phantom pains. With no real diagnosis and the only option to be that of exploratory surgery, I gave up and realized that the pain from the knot that had remained for two years at the very back of my throat must become an acceptable part of my life. The recurring inflammation and continual excessive amount of phlegm were to become the norm.

I reflected, sighed, and accepted my fate. After all, at least my vocal cords were still in top shape. Yes, the inflammation and phlegm still caused me to have periods of discomfort and lack of vocal stamina. But, hey, I’d since put out several successful songs, started an online vocal school, and appeared on more television shows, all highly successful. So, I must accept this tiny flaw that was of my own making and keep on keeping on.

But then I stumbled across a website called DoctorVox.com when someone had shared the link on Facebook…(Sorry, I don’t remember who shared it, but thank you.) So, I went to the site and checked out the DoctorVox device, a glass apparatus based on the principles of LaxVox Voice Therapy Technique, but also allows for both exhalation and inhalation therapy. This device was created to save voices, even reverse nodules and other vocal issues, as well as warm up the voice quicker and more efficiently.

The fact that this device could better my student’s experience was enough to keep me intrigued. Could this device help to alleviate my pain? Could it help me warm up quicker and more efficiently?  I had to have one. However, I had trouble with the ordering process, shipping to the US, so I contacted the company. They reached back out instantly and helped me to work it out. Within weeks I had the device. I played around with it for a few days and then contacted Turkish laryngologist,  Dr. Ilter Denizoglu (the creator of DoctorVox) and his business partner, Atilla Ozbilen. I was so intrigued that I interviewed them to share the news of this device with my fans. Actually, if I can back up a moment, I had bugged and bugged them before the interview. I was selfishly complaining that it would be hard for me to pack the DoctorVox with me when I fly around the world to perform on television shows and conduct vocal workshops because I would end up breaking the glass apparatus. You see, I am very clumsy. So, I begged them to create a new version, one made of plastic or rubber that you could stick in your back pocket and pull it out when needed. You’d just use it with any water bottle. I even told them to call it the pocketVox. Low and behold, by the time of the interview, they already had the first prototype. Thus, the pocketVox was born.

Since the time of using both DoctorVox and pocketVox, I’ve started to notice vast improvement of my tone and a lessening of the inflammation that I carry from my bizarre glass shattering situation. Am I completely healed? No, but I am a LOT better than the previous two years! And I’ve since been lucky enough to meet with Dr. Denizoglu so that he could examine me first hand. I can say hands-down that he is the best ENT I’ve ever seen and I am already on the road to recovery. But along this road, I’ve worked with both the DoctorVox and pocketVox devices to see what I could learn on my own, so that I could pass my finding on to my own students.

I found that by using this simple device, a back pressure is created when the sound of your voice reaches the water in the DoctorVox glass bottom or in any water bottle used with the pocketVox. This back pressure seems to limit the amount of air released by the singer, which is a benefit, considering many singers wear out their voices by using too much breath. But, more importantly, you can literally feel the vibration created by the water bubbles as they seem to reach back down inside your trachea to your very vocal cords, creating a strong resonant vibration, or an “audio massage” upon your vocal cords, if you will. As well, when you inhale through these devices, you can hydrate your vocal cords easily to aid in the maintaining of their elasticity.

Since the beginning of this year (2016), I’ve become a DoctorVox/pocketVox addict. I even worked with the Natural Voice Perfection Institute to promote DoctorVox in Poland. They graciously invited Dr. Denizoglu to Krakow to conduct a workshop and share his knowledge and now the singers of that amazing country know of this wonderful device. I even take my pocketVox with me wherever I go. I recently took a pocketVox to Amsterdam to perform on the television show, Go for It! It is what kept my voice in top shape for the performance.

II find myself writing this blog for YOU, the singer, because hundreds of singers have bought a pocketVox now from hearing my own testimony, but still I am flooded with questions about the pocketVox.

Will it help me to vocally warm up better? YES.

Can I use it to sing my songs through and bubble the water? YES

Can I cool down with it? YES.

Can I use it to help reverse my vocal nodules? YES

Will it work with my current vocal exercises? YES.

Still, as I answer YES to all of the questions, know that I am not a doctor…but I do have one backing me; and I am positive that Dr. Denizoglu would agree with my answers. There is a LOT more to this device. To fully train another student to the extent of the beneficial outcome of using DoctorVox therapy, one must become certified in the applications of the DoctorVox/pocketVox devices…but I am already working on that. Until then, I’ll continue to use it with my own exercises, praise it, tell my students and fans about it, and hope every singer in the world owns one.

I am personally thankful for this device. I use it with all of my Isolation exercises from my book, Raise Your Voice, and with all the programmable scales available through my app, Tuned XD…I’ve been showing my students how to use their pocketVox devices when doing my exercises and many have told me of their increased range and flexibility gained by using the pocketVox… I’ve even given one to James LaBrie of Dream Theater…He seems to like it because I caught a picture of him on Instagram using it during rehearsal:)

All in all, DoctorVox devices are an amazing tool that every singer should have in their gig-bag. YOU need one too. This may just save your voice.

Learn about Tuned XD at TunedXD.com.