The life of a glass shattering vocal coach is a constant whirlwind. With eight new vocal books, ten vocal videos, several new projects for screaminglessons.com and recording my first record currently all in production, it is tough for me to do many reviews. But this is one that needed to be out there!

With all the recording work I’m doing now, I’ve been building a small, portable home studio to allow me to keep up with all my work without having to spend hours upon hours in a recording studio. As most of you know, I am a huge Blue Microphones and TC Helicon fan, and as of late, I’ve fell in love with the Reaper recording software over my Sonar and Adobe Audition setups.  But a portable studio wouldn’t be complete without an atmosphere in which to record a clean, solid vocal without any noise, feedback, or echo. So I set out to find the perfect vocal booth that I could move about as needed, a vocal booth that would truly eliminate and absorb echo, dampen outside noise, and not affect the sound of the microphone itself. I found it in the Portable Vocal Booth Pro by Editors Keys. But first, let me tell you how I found it and why I chose it…

I started my search by typing in “portable vocal booth” on Google. Low and behold, you’d be surprised at the sites I found that cater to schematics for building portable sound booths, as well as supplying pre-made vocal booths. In my search, I found vocal booths of all shapes and sizes, from solid wood enclosures palstered with acoustic foam to form separated rooms, to flimsly solid foam enclosures, plexiglas window enclosures, as well as foldable setups that use mesh/windscreen type materials for sound barriers. I even  found small, foam boxes that reminded me of the plastic boxes I’ve used on TV shows to surround the glasses I’ve broken with my voice.

I studied each vocal booth, read different ‘how-to’ schematics and watched YouTube videos for building my own set up. After all my studies, I carefully weighed  many options including portability, sound absorption and space contraints. While it would be awesome to build a sound booth right in my home, the ceilings in my office would not allow for it and of course, it would take up too much space in my teaching area. So, upon narrowing my options, I knew I wanted something I could pack up and move about easily, in case I needed to record at our rehearsal hall or move to another room in my house.

In the end, I boiled down my final choice to two companies. After careful inspection and consideration, there was only one obvious choice for me. The Portable Vocal Booth Pro from Editors Keys. I loved the compact design and the way the company created a semi-circle booth to encapsulate the microphone on three sides, leaving easy access for the singer to do their thing-sing into the mic. The fold-able design of the pro version allows for easy portability as well as the ability to adjust the enclosure width by folding the vocal booth at its center. 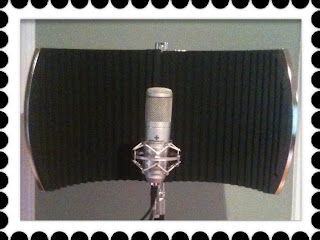 The Portable Vocal Booth Pro, as you can see in the picture above, is a foam enclosure approximately 20 inches wide when expanded to full width.  The pro version also comes with it’s own stand and unique clamping system. I must say, the pro version mic stand is one of the most solid mic stands I’ve ever used or seen. The stand itself has a locking tri-pod at the bottom and the diameter of the stand is wider than most mic stands. It’s a solid construct and supports the top heavy vocal booth without worry of it tipping over. The Vocal Booth pro also a perforated aluminum backing that helps to absorb sound.

Some of the extras from Editor’s Keys I’ve attached in the picture to the right include a dual layered pop filter/pop shield, which saves me the trouble of attaching two pop screens, which I need for my loud mouth. I’ve also attached the Editor’s Keys SL150 USB mic, and an Ipad holder, in case I need to read bullet points for audio files I record for my books.

Looking at the pictures below, you can get a better view of the Mic, windscreen and Ipad holder. I’ve yet to test the microphone, because for recording, I will be using a blue microphone, but I promise that I will test the USB mic and tell you all about it in another review. However, if I’m feeling creative, the pro version comes with a dual mic attachment, which means that I can connect the dual mic attachment and use both my Blue mic and the Editors Keys as well. 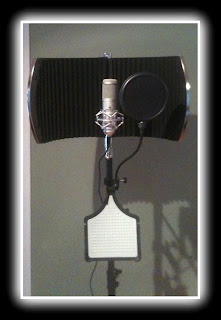 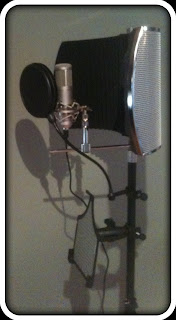 So, what makes the Portable Vocal Booth so special? Well, I’ve tried some simple recording tests with and without the vocal booth and the major difference I noticed was that the vocal booth easily diffused the echoes in the room, keeping the sound nice and clean. Editors Keys states that the specially molded foam has been shaped and processed in a way which not only helps to create dry vocals, but also prevents exterior noise, such as traffic noise or air conitioning entering into your mic, which will eliminate that pesky sound of the computer fan. The Pro version also has a punched aluminum back, which adds an extra layer of audio deflection, compared to the Home soundbooth version. This dramatically reduces audio interference during your perfect takes. This not only imporves the detail and sonic character of your recordings, but also gives you a crisp, clean vocal  which is often hard to achieve when recording in certain studio setups.  It’s also important to note that only the pro version is fold-able, whereas the home studio version is a solid semi-circle. But, if you don;t plan on porting your vocal booth around, the home studio version would serve just as well and save you some money.

Not only do home users use the portable vocal booths, but they are also used by pros worldwide.  It is so easy to set up and comes with a 100% money back guarantee. You can return it, no questions asked. But don’t take the word of a glass shattering vocal coach. Check it out for yourself at editorskeys.com.

PS- Check out the Vocal Booth Pro in action

Previous Post Is your Vocal Coach ripping you off? Next Post What gear do you need to teach music online?