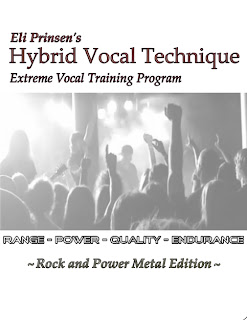 Seldom do I review vocal methods like years ago with The Voice Connection, but I couldn’t pass up reviewing Eli Prinsen’s vocal training program, Hybrid Vocal Technique. Like myself, Eli was a Vocal Power (Jim Gillette) user for many years, and to my surprise, a Raise Your Voice user as well.

So, I got my hands on Eli’s program several months ago and decided to give it a shot. The program was a very thorough in-dept, easy to understand audio program created much in the same fashion as the original Jim Gillette’s Metal Power. HVT, like Metal Power is also a 4-Disc program  that not only covers solid vocal technique, (a technique which I fully endorse might I add), but  includes tip and tricks as well as a variety of exercises to help the beginning or pro singer alike to build solid vocal muscle for more range and power. I personally tried each exercise and was happy with the structure, vocal example, and range provided for each scale.

Having in the past performed about every exercise on his cds, I knew beforehand their value at enhancing range and power. It’s no secret that Eli uses a variety of exercises he has learned from both Jim and I and other great coaches as well, hence the name Hybrid Vocal Technique- a “hybrid” vocal method, or combination of all the exercises which worked best for him, morphed into one program to give the singer the best combo program available. I personally support him for his efforts because all exercises have already been out there for hundreds of years in one form or another, so there’s nothing new under the sun. But, what Eli did was create a way to make Sirens and Do-Re-Mi’s his own method and he did so in such a way that when you listen to the recordings, you feel comfortable with him as a vocal coach.

I must say, just by listening to him on the audio, it even made me want to work harder. And if that isn’t enough to drive a singer to want to improve, just listen to him sing with his band The Sacrificed.

It’s no wonder that Eli was chosen as the new Sacred Warrior singer; he practices what he preaches and worked hard to prove that HVT works. So, if you’re looking to try a new audio training program, Hybrid Vocal Technique has my seal of approval…Just don’t forget to pick up-a copy of Raise Your Voice while you’re at it, haha. Check out Hybrid Vocal Technique HERE.