This blog isn’t so much a review, as it is a fact. I am sure I will review each product separately in the near future, but for now, I wanted to tell you that my new singing series for teens, “Sing Out Loud” which will be releases end of August/beginning of September features many audio demonstrations which were recorded using products developed by IK Multimedia. After testing IK Multimedia’s new iPad/iPhone iRig Mic, and trying their new multi-effects vocal processing app, VocaLive, I chose to use both the mic and app to record and mix all audio files for this series.

Why didn’t I go with my usual tried and trusted computer setup for recording/mixing? Because I am addicted to my iPhone and iPad and wanted to test their capabilities. I own several cool apps for recording and vocals, but when I found this fully functional app for vocalists, I decided to give it a test drive. VocaLive features the following: 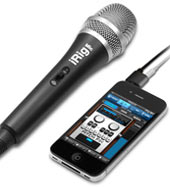 I was so impressed with the app that I attempted recording some vocals with it, but unfortunately, it didn’t sound that great…But that was because I didn’t have a decent mic to use with my iPad. So, after further exploration, I found that IK Multimedia also offered a microphone made specifically for iPad/iPhone users which plugs directly into the audio input. So I got one in hand and tested it. I was quite surprised at the sound quality. For the low price, I truly thought it wouldn’t be professional enough for recording. I was wrong. The audio files sound crisp and clean as you’ll hear when the books are released. The iRig is a REAL condenser mic that is great for recording when combined with VocaLive. 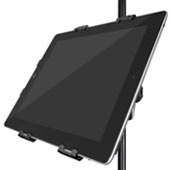 If I had one complaint, it is that the microphone cord is very thin, but I am told they are working on a version for performing live with a heavier cord. Still, you could use this in conjunction with VocaLive for live performing, especially since they have a clip mount called the iKip for iPad users to enable the iPad to be attached to a mic stand. This has been perfect for me as I record the vocal demonstrations for Sing Out Loud. I am completely amazed at how technology has grown and now allows me to bypass using something like Garage Band or Adobe Audition on my computer. I can pack my iPad or whip out my iPhone, plug in the iRig mic and record on the spot. The great thing about the whole setup is that a singer can go through a whole variety of effects and preview how each affects their overall sound before saving that final vocal mix. It’s truly mix and match on the go.

So singers, if you are looking for a great way to do your vocal lines at your own leisure, you can test out the IK Mutlimedia setup, import your music tracks, sing along, add the effects as you wish, save the mix and spit out your mp3 for your website or iTunes. Learn more about it all at http://www.ikmultimedia.com.

To learn about the Sing Out Loud series, go to http://venderapublishing.com/upcoming-books