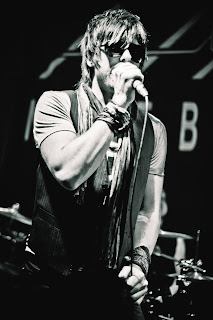 This interview is with sing Daniel Rossall, lead singer of London-based Rock band, NIGHT BY NIGHT. He landed the gig after a friend of the band recommended that they check out Daniel’s YouTube channel. After hearing audition pieces Daniel had recorded for Heaven’s Basement (Redbull Records), Night by Night invited him to an audition.

The band have been together two years and are poised to make a big impact on the Rock/Metal scene with their eponymous debut album, produced by Romesh Dodangoda (Lostprophets/Funeral For A Friend), aiming for release in June 2012.
Since the video for the band’s first single, Time To Escape, hit YouTube, there has been a tremendous response, garnering 12,000 views in just 2 weeks. It has attracted the ear of radio stations, rock fans, industry and some highly-regarded artists, including Tony Harnell (TNT, Westworld, Starbreaker), CJ Snare & Bill Leverty (Firehouse) and Ted Poley (Danger, Danger).
Jaime: Daniel, how did you get into singing?
Daniel: I became a singer by accident. In my local area, I had always been known as a good guitarist, but never a vocalist. But when my first band needed a singer and couldn’t find one, I somehow ended up with the job. I was 17 and I couldn’t sing at all! People used to say: “The band is amazing…but you need a singer!” I didn’t feel like I was doing the band justice, so didn’t enjoy the role. At 18, a friend and I entered a local competition  – mostly for a laugh. He sang Van Halen’s “Panama”, whilst I chose Roth’s “Just a Gigolo”. To my surprise, I won! It was judged by local radio station DJs who then championed me on the air. For the first time in my life, I began to feel some confidence toward singing. 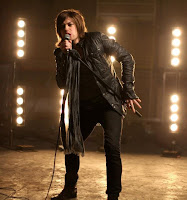 Another significant milestone in my vocal development was Firefest 2005, when I saw TNT, Firehouse and Jeff Scott Soto. TNT’s Tony Harnell’s vocal performance really affected me. I’d never heard singing like it before and he set a new level that I wanted to reach. Of course, I loved the music and songs –  but what a voice, what a rarity. TNT aside, all the performances were great, the high-points being Firehouse’s Shake & Tumble and Jeff Scott Soto’s showmanship. The very next day, I signed-up for some classical lessons and bought some vocal books. It was time to get serious about singing.
I love a lot of different music, mainly guitar-orientated, but my heart is in rock and heavy metal. TNT, Van Halen, Dream Theater, Extreme, Symphony X, Queensryche, Ratt, Warrant, Firehouse, Mr Big, Journey, Tesla, the list is endless. But I do tend to find that music from (or influenced by) the ’80s does it for me.  My biggest vocal influence is Tony Harnell and I’m a big fan of Steve Perry, too. There’re many others, but it’s those two I take most from.
Jaime: Love Tony Harnell. He’s a big influence on me as well. Tell me about your experiences so far trying to make it in the business.
Daniel: I’ve been gigging for 10 years on the amateur circuit, so I’ve been around various scenes for some time. Trying to make it in the music industry these days is one hell of a battle, but the friends you make, the musicians you meet and the fun you have performing make it all worthwhile. Since joining Night By Night, we’ve played in Finland and Norway as well as around the UK. This year, we have numerous shows lined-up, with Trashfest V in Finland and Hard Rock Hell in Wales  being the two I’m most looking forward to.
Back in May 2011, I recorded two tracks for Night by Night and in January 2012 we did the vocals for our first album. It was a bit of a rush  – I had to record 8 songs in 3 days and, let me tell you, that wasn’t easy for me because the songs are quite demanding in places. I warmed-up, cooled-down and went through excessive amounts of water and juices, all of which really helped – I had no strain or issues with my voice (Hat-tip to Jaime Vendera).
Jaime: I’m loving the new songs. Tell me a bit more about your band, Night by Night. Daniel: Night By Night are a melodic rock band drawing a lot of influence from 80’s rock and AOR. There’s a lot of 3-part harmonies that give the music a melodic edge and it’s this feature that firmly distinguishes us from the rest! With a flawless, modern production we like to think we have revamped the music of old and created our own contemporary version. We call it “Anthemic Hard Rock”! Unlike other Classic Rock revivalists, we aren’t jumping on a “throw-back band wagon”; our approach is unique and refined, updating the classic song-writing sensibilities to inspire three generations of fans! Our first album was produced by Romesh Dodangoda (Bullet for my Valentine/Funeral for a Friend/Lostprophets) and we’re shopping it to labels, aiming for release in June 2012.
Jaime: We’ve actually talked, well, actually emailed, a few times over the years. I was impressed at your dedication to my methods. You take voice seriously. What do you personally do to keep your voice in shape?

Daniel: I read your books Raise Your Voice (2nd Edition)  and The Ultimate Breathing Workout religiously! I take the warm-up exercises very seriously, both physical stretches and vocal warm-ups. I see parallels between vocalist and athlete and, as a football (soccer) player myself, I know that before a game you must stretch the muscles that you’re going to use to avoid doing yourself damage. The same applies for vocal muscles and singing. I do a lot of breathing exercises; I take notes of my progress, especially when working on sustaining the long notes; I always try to sing for longer and longer. It’s a very important exercise, because our songs have really long phrases in places and I need to be able to deliver power on one breath. The Ultimate Breathing Workout is THE book to use if you want endless air supply and stamina for your voice.
Jaime: I’m guessing you like my methods, haha:)
Daniel: They’re great:) The methods in both of your books are of high value to any vocalist whether  singing for fun or professionally. You have gone beyond what most vocal coaches teach; your knowledge and depth of the art-form is unrivalled and brings high rewards to those who choose to apply it correctly. Personally, I am more in touch with my voice, how it works and what it requires to fully flourish. I’ve gained power, tone and stamina from using both books as well as added confidence with my vocal capabilities.
Jaime: What do you do health-wise to keep your voice in shape?
Daniel: I drink a lot of water daily, as well as juice! I take multi-vitamin tabs and zinc tabs, too. It’s paramount that my voice is physically healthy, possessing substantial energy to perform/sing, which means a balanced diet with exercise. I used to drink alcohol most weekends, but I’ve abstained since the start of 2012. I need to be in the best possible shape, so that my voice can soar with ease. I’ve realised it’s a gift and I don’t want to take it for granted by abusing my body; if anything I want to continuously expand on the gift I’ve been given and in turn I hope it touches the audience.
Jaime: Got any cool stories from the road with Night by Night?
Daniel: Well, my first show with Night By Night was in Helsinki, Finland! I hadn’t performed onstage in 3 years so, as you can imagine, I was quite curious and a little nervy! I like to make a grand entrance, the kind where the band kick into the opening track and then, all of a sudden, the singer emerges from the shadows! I was amazed by how many people were in the audience and how well the show was received. It was quite a stepping-stone for me and soon after I moulded into the band like a member who’d been there since day one. After the show, we all went for a drink in town and met with fans…the rest is best saved for the auto-biography; total rock ‘n’ roll tales.
Learn more about the band, Night by Night at their Official Site.
Follow them on Twitter and Facebook.
Buy their single, Time to Escape on Itunes and Amazon.