Vendera Interviews: Ben Carroll of the Hollow Glow and RA 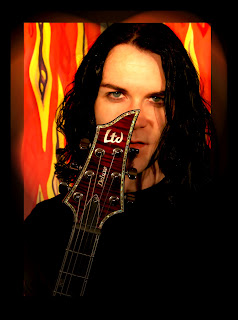 In this interview, I’m speaking with my long-time friend and student Ben Carroll. Ben Carroll is a well-known Universal recording artist, musician & songwriter. His band Ra (Universal/SMR) has released five albums over the past ten years with combined sales reaching over a half million units. With a sixth album slated for release in the first half of 2012, Ra is still going strong a decade into their career. Ra has had multiple charting radio singles, songs used in multiple movies, video games, television and sporting events, and has played with Korn, Godsmack, Disturbed, Seether, Alice in Chains, and the Deftones, to name a few, and has worked with the industry’s top producers and engineers.
The ESP, Fractal Audio & Mesa/Boogie endorsed guitarist has also released 2 instrumental solo albums, “A Dream Between Two Fires” & “Tasty Tunes” and is also in the process of launching a brand new band, The Hollow Glow, which is his first outing as a lead vocalist. Ben’s vocal style is very different from RA, very unique along the lines of bands like Muse. The Hollow Glow has been greeted with rave reviews even from the earliest stages and is currently in the process of recording new music due out in Spring of 2012. Ben is a Berklee trained musician with 15+ years of teaching experience.
Jaime: Ben, I remember the day you told me you wanted to start a band, but you needed a lead vocalist. I believe I convinced you to do it yourself, haha. So, let’s talk about your singing background. 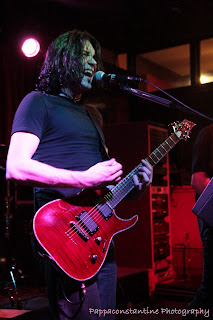 Ben: I have to admit that I was always a reluctant vocalist. I actually never wanted to sing, all I wanted to do was play the guitar. I started singing background vocals when I joined Ra over ten years ago, because Sahaj made me…haha! I never had any ambition to be the “front man” and I only ended up doing it because I couldn’t find what I was looking for in a vocalist to start a new project anywhere. I didn’t make the leap to lead vocals until I started hanging out with you, Jaime. You gave me the confidence to take that plunge…and you helped me to build the skill set to actually pull it off. I would not be singing lead vocals in The Hollow Glow today if it weren’t for you…period. Working with you gave me the confidence to go from singing backing vocals to singing lead.”
Jaime: Was Ra your first leap into the pro business?
Ben: Yes, and so far, I’ve been very fortunate in my musical career. I’ve had major label record deals, multiple charting songs on the radio, extensive touring & recording with some of the biggest names in the biz. I’m looking to keep that momentum going with my new project.
Jaime: I think we should discuss your current project.
Ben: My current project is called The Hollow Glow. Like I said, this is my first time out as a lead vocalist, but it’s actually been really, really comfortable. Working with you has helped out immensely with the ease of that transition. The Hollow Glow is a rock band that focuses on songwriting, the songs definitely take precedence over all else…and the sound is basically an accumulation of all of the vast range of my musical influences…from Led Zeppelin & Pink Floyd, to Alice in Chains & The Smashing Pumpkins, to A Perfect Circle & Tool, to Muse & the Foo Fighters, to Coldplay & U2…and that just barely scratches the surface. There’s probably a lot of Ra influence in there as well. Guess there is no getting around that one. 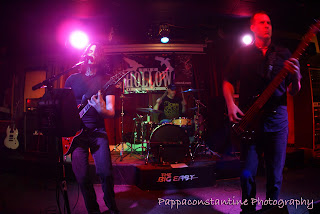 Jaime: What specifically do you use from the Vendera Method?
Ben: I always use the Voice RX warm up mp3 & the Driven to Practice mp3s (which we developed together) to warm up. I also work on the materials from my private lessons three-four days a week to continue building my voice no matter how busy I get. Before I practice, I always do the Vocal Stress Release System (from your book, Raise Your Voice), usually while I’m also doing the Voice RX. I occasionally do the Ultimate Breathing Workout as well.
Jaime: Wow, I never thought of doing Voice RX while doing Vocal Stress Release. That is a GREAT tip! Thanks, I may have to use that in the new book I’m writing;) Since you’ve racked up a lot of studio and road time, can you share a tip that helped you sing in the studio, or on the road?
Ben: Always warm up!! =) I ALWAYS warm up my voice before a show or before rehearsal or before a session. Voice RX and Driven to Practice are perfect for that. I just pop in a CD and do lip bubbles & scales in the car before a show…and I’ve learned there is only one way to get better as a vocalist. Practice…better yet, practice with the guidance of Jaime Vendera;)
Jaime: So, share a cool story from the Ra tours.
Ben: I remember one time at a Ra show…probably six-seven years ago now, there was this kid standing right in the front row, totally looked bored out of his mind, like he wasn’t enjoying himself at all. So I went out of my way to repeatedly get right up in his face. Nothing I did got any change of expression out of this kid. So I was thinking like “screw this kid, what a dick.” haha! After the show this same kid comes up to me gushing and tells me that this was the best show he’d ever been to, that Ra is amazing and I’m his favorite guitarist in the world…and so on. Well, didn’t I feel stupid. =) Just goes to show you, you can never really tell what a person is thinking. And even if you think you’re boring an audience, in reality, you just may be giving them the performance of a lifetime. It’s all in your head…don’t undermine yourself.
To learn more about the Hollow Glow, follow them on Facebook and Twitter, go to bencarrollmusic.com or click HERE.
Buy Ben’s solo releases, instructional guitar materials and the latest Hollow Glow releases HERE.

Previous Post Vendera Interviews: Daniel Rossall of Night by Night Next Post An Interview with Sahaj Ticotin (Solo Artist and singer of RA)