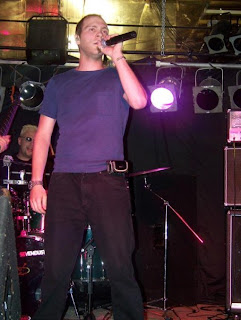 Ramone Talarico began singing and playing guitar around the age of seventeen, ping ponging between different garage acts. By his early twenties, he began writing and recording his own original material on a very modest home studio. At the age of twenty eight, his band, Facing Eviction, played countless shows in the NJ , Philadelphia and DE area. After the unfortunate dissolve of Facing Eviction, Ramone returned to solo writing, only returning to the rock scene six years later when he formed a new band called, Liturgy of War, featuring some incredible musicians in Italy, Argentina and Canada. Today, Ramone continues to work with Liturgy of War and another band in Argentina to finally bring about his dream of Melodic rock/Hard rock, with a twist of pop catchy style vocals in the mix.

Jaime: So, Ramone, what got you into singing?
Ramone: I began singing as a kid to anyhting from the 80s, Mostly Rick Springfield and all the 80s hair bands. Bands like Duran Duran, Information Society were also heavilly into the mix. My father was a singer who almost made it big in the early 1960s, I was always around music and voice. When I was in my mid teens, I began singing much more often…and noticing I was actually in key. I had a strong fascination with creating music and always improvised. I began persuing it even more…by the time I was seventeen, I was picking up my first guitar and singing every day.

Jaime: What’s your professional experience?
Ramone: My professional experience is limited with touring, despite playing a ton of shows for a year with my former band I never got a chance to really break out of my shell. Being focused on  studio work,  I am on a STRICT regiment and I handle things professionally in regards to prioritizing the job at hand. Working now with two bands overseas I know I have people counting on me to Work daily on their projects, and they have faith I will not slack.

Jaime: How did you get picked up for Liturgy of War?
Ramone: Liturgy Of War; I don’t know how it happened but basically a dream came true. After a couple personal lessons with you in 2010 I began drastically improving. I uploaded a few videos of me singing and I soon started getting offers from a few musicians in different countries. In this process I met a phenominal guitarist, Claudio Minotti, an incredible drummer, Enrique Paglia, and an amazing melodic keyboard player, William Sweetling. Before long, this Project in 2011 was formed and musically we have created the very sounds I have been looking for being a huge AOR fan for years. You will find trace amounts of Rock/soul and AOR styling. Im very happy with how it came out…but as always I’m pushing to do better for our next CD.

Jaime: I heard you took a few lessons from Tony Harnell. Must’ve been an amazing experience.
Ramone: Yes. I had four personal sessions with him in NY. Tony helped me to overcome my initial stage fright as I was just about to get on stage for the first time in my life. He opened me up to a good regiment of vocal health routines and while I didn’t have much time with him, he did show me some technique that helped me out during a rough time where i was practicing more and more due to the band being active and gigging. He taught me how to respect my voice and also when to “back off” so I didn’t abuse it. After that, I took my voice more seriously and kinda “shielded” it out of the elements you could say. I have to say i would have gone for more lessons but 3+ hours EACH WAY on a train …just wasn’t happening, I didn’t get any sleep (sometimes none). Also I was seriously dehydrated. Not many people even get to meet their favorite singer,…but I did, and also a few lessons to boot! how great is that?

Jaime: What specifically do you use from the Vendera Method?

Ramone: Lately I have been working on the power push even more than before, having done so I went past my break point by a massive 5 notes to F#,(some nights I hit “G”) and It doesnt fatiege me doing so like before. I know it works. Your method for getting rid of tension has helped me as well. Not everyday is the same as the one prior for a singer, sometimes I feel I have much more tension in my shoulders and neck and getting rid of most of that is the key to an unrestricted performance. Transcending Tone is one exercise I’m trying to master, I find it relaxes me greatly!

Jaime: How have my methods helped you?
Ramone: Other methods might have helped me a small bit and I tried a couple in the past, but I didnt exaclty know WHY they were helping and it didnt tackle the vocal issues I had at the time, I still lacked an understanding on what I was doing and what I should be listening for within myself. Your system, I felt explained the most and made it simple. I have grown substantially more as a singer with your methods and am looking forward to your next release so I can improve a bit more =)

Jaime: Can you share a tip that helped you sing in the studio, or on the road?
Ramone: Steam inhaling helped me this winter with all the dry heat, and the neti pot really helped to moisturize my inner workings as well. The method of Mindset is one of the most important, Affirmations are so important. Once I changed the way I looked at myself, things changed for the better.

Jaime: Share a personal story. Could be a funny story from the road, from your Liturgy recording sessions.
Ramone: I’m a huge practical joker, so, each time Claudio would send me new mixes to work on, I write joke lyrics. For example Since his last album was fairly heavy, I joke  about him writing “the Devils music” He never knows what to expect from me, but when he sends me this deep meaningful soft heartwarming ballad, and I write bogus “METALish”  lyrics and sing the whole thing entirely…I assure you; it gets a chuckle and also a big “ARE YOU SERIOUS”? in the subject line…

Check out Liturgy of War at Reverb Nation and CD Baby

Previous Post Vendera Interviews: An Interview with Dave Nadolski of Under the Flood Next Post Shattering Glass in China