Vendera Interviews: An Interview with Dave Nadolski of Under the Flood – JaimeVendera.com

Vendera Interviews: An Interview with Dave Nadolski of Under the Flood 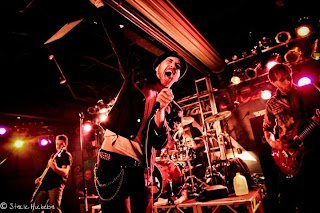 Dave Nadolski is a 24 year old singer/songwriter from Charlottesville, VA.  After founding ‘Under the Flood’ in 2005, he hit the road at the age of 18 and has spent the last 5 years touring the nation.  Under the Flood has released 3 full length albums and has had 2 singles crack the top 50 on Active Rock Radio.  Dave is currently writing and recording material for several projects and artists in various genres.

Jaime: So, Dave, how long have you been singing?
Dave: I’ve been singing pretty much ever since I could speak.  I was always just one of those kids who would find stuff to sing about and I’d make up all kinds of stupid little songs, hahaha.  I started taking it a bit more seriously when I was 16, singing in a high school band, which ultimately led me into starting Under the Flood.

Jaime: What professional experience do you have under your belt?
Dave: I started touring nationally when I was eighteen, and I’ve been fortunate to have been able to visit hundreds of cities, and perform in almost every state in the U.S. — probably not something I would have had the opportunity to do without music.

Jaime: What programs of mine have you applied?
Dave: I use it all!!  I really didn’t get to start working with you until we were almost done with ‘A Different Light’, and now I wish I could go back and re-record everything!  I’ve taken several private lessons with you now, as well as used the Ultimate Breathing Workout.  Ironically, Kevin Martin from Candlebox told me about The Ultimate Breathing workout, and I had no idea it was written by you until I actually picked up a copy.  It’s a must have for anyone who’s serious about singing!

Jaime: Was I the only coaching you’ve had under your belt?
Dave: I’d taken tons of voice lessons over the years from local coaches and just wasn’t happy with my progress.  I asked Myles Kennedy from Alter Bridge if he had any recommendations for vocal coaches that he’s either used or studied with, one of them was you.  I think I made more progress in two Skype lessons with you than I did with all of my other voice lessons combined.  As a student of anything, be it voice, writing, math, you’re always learning, but I think there’s a Eureka moment that you experience where something clicks and it all starts to make a lot more sense – you helped you me there.  If your cords are fatigued or beat up, use the Vocal RX Warm-Up, it’ll help you regain your voice. If you want to be able to sing with more power and range, then you have GOT to get The Ultimate Breathing Workout.  Proper breath support is everything, and if you want to improve your power and range, you’ve gotta work on it.  The difference you’ll feel is so incredibly noticeable.  When I started the program I could hold my breath for 51 seconds.  Less than two weeks in and I was already up to 2 minutes and 15 seconds.  That’s an additional 84 seconds of breath capacity!  If you use the program diligently, it works.  You will see results, and you will experience improvement in your voice.

Jaime:  Can you share a tip that helped you sing in the studio, or on the road?
Dave: I think one of the most important tips that I can offer is to make sure that you properly warm up and warm down before and after every performance.  There’s not a runner in the world that would try to run a marathon without stretching their legs first, you should think of your voice in the same way.  Being out on the road singing every night imposes a multitude of hardships on both your body and your voice.  That being said; try to take care of yourself as best you can, including:

1.) Sleep! – As difficult as it is to get the proper amount of sleep, there’s nothing worse than being run down and trying to keep your voice in tip-top shape.
2.) Hydrate! – Less Beer, More Water.  Not as much fun, but infinitely better for your voice.  Fill up a gallon jug at the start of each day, that way you can track your progress.  You’ll know where you’re at, and when the gallon’s empty, you’ll know you’ve reached your goal.
3.) Don’t Abuse Your Voice! – Save it for the stage.  With all of the craziness that occurs on the road, it’s hard to sit on the sidelines and be silent, but unfortunately for you, you didn’t wanna be a drummer.  If you must speak, do it with proper breath support and don’t whisper!

Jaime:  Wow, what great tips. So, tell me about the road. Any favorite stories in particular?
Dave: One of my favorite stories from the road happened several years ago when we were playing at a club called Phoenix Hill in Louisville, KY.  Halfway through our set, several highly intoxicated females decided that they wanted to get up on the stage and dance.  One of the girls wearing high heels chose the back left corner of the drum riser as her dancing station, disaster followed.  During one of the songs her heel slipped off the back of the riser and she face planted a good four feet to the ground.  Thankfully, she was out of it completely unharmed except for her pride.  The best part of it all was that the club happened to be filming the show that night and sent us home with a DVD to preserve the moment. 🙂

Click the following links to listen before buying their releases:

Alive in the Fire