This blog is actually from my guitarist, Scott Stith. In 2010, Scott and I performed on German television and toured Bahrain and Australia supporting my vocal workshop tour. During that tour, we had the support of Blue Microphones, TC Helicon and TC Electronics. So, Scott decided to post his thought’s on TC Electronics’ amazing NOVA guitar system. Here goes:

Hey everyone, I hope you have had just as good year so far as us.  Just to let you know a little about myself, my name is Scott Stith.  I’m a long-time guitarist who has been playing music with Jaime Vendera for over two decades. Over the years, we’ve put together a lot of killer stuff.  I can truly say that he’s my writing partner in crime. Right now we are in the process of recording our first full-length release for 2012.  Throughout the whole process of performing on television shows in Europe, hitting stages in the US, Bahrain and Australia, and writing music, I’ve had the TC Electronics Nova System there every step of the way.  It’s been the center of my sound since I started using the Nova system. In all honesty, I never expected to make it the main staple in my unique sound when I first started using it. But, within a week of playing with this amazing floor pedal, I discovered what a powerhouse the TC unit can be for the modern rock guitarist.
I recently changed my whole set up, one I had stubbornly been using for years, due the demise of some equipment.  The one thing that didn’t change was the Nova.  It has worked very well in any situation that I have thrown at it. I have to say, that it has been the most rugged and flexible processor I’ve ever used. The only problem I foresaw the more and more I tested the unit was deciding exactly how I wanted to use the Nova in my setup. As it turns out I’ve wanted to simplify my rig, so I use my Nova in place of a variety of stomp boxes in front of my amp.  I’m really happy with the sound and if any of you have had the privilege of hearing TC’s gear first hand, you know that they are top notch with their effects.
So what’s the advantage of the Nova system? For me, it’s simple. This compact floor pedal has the same effects as their G system, but the compact setup makes things easier and more affordable for hitting the road and making big sounds.  Right off the bat you have chorus, delay, pitch, boost, analog distortion, overdrive, built in tuner and my very favorite compression.  Best of all, each effect has many variations and tweaks.   I could go on and on about the simplicity and adjustability of each effect but it’s better you try the Nova for yourself. For many guitarists, the Nova truly is both a space and money saver. Could you imagine going out and buying all those individual effects pedals and then realizing that, “Hmmm, that pedal just isn’t what I was looking for” and then going out on the hunt for your next hopeful pedal.  Money and time wasted. With the Nova, all you have to do is jump into the user-friendly processor, dial in whatever you’re looking for, and you’ll be one happy rocker. Trust me, whatever sound you are looking for, it’s in there.
So, now that you know how I personally use it, you can see that it works well in an effects loop, or in front of your rig in place of stand-alone pedals. Better yet, experiment with the Nova by creating your own effects patches and/or midi the Nova to a whole line of other bad ass pedals that TC has out right now.  The options are limitless.  Give it a try and you’ll see what I’m saying. Go to http://www.tcelectronic.com/novasystem.asp to discover the power of the Nova system for yourself.  If your rig is missing something the Nova System will fill that void seamlessly. If you’re a musician, TC stands for superior quality, you won’t go wrong by choosing TC. As lead backing singer form my band, I also use TC Helicon vocal processors. They’re the brand to beat! 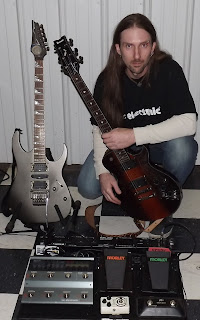