A Mobile Rig for Singers? (Part 1)

Absolutely!!! You CAN have your own vocal rig for recording and for the stage to complete your vocal setup without costing you an arm and a leg.

Technology has grown by leaps and bounds in only a few years. Now the latest iPhones are as powerful as the PCs of 10-15 years ago. I remember using the DAW once known as Cool Edit Pro on my old Pentium II PC to record songs, recalling how slow and painful it was to record as I layered track upon track and watched latency slowly siphon away my creativity. But, now, I literally record all the vocals for Vendera&Stith songs right on my iPad and have yet to run into latency issues even after my obsessive compulsive behavior causes me to create a choir of Jaimes:) So, how did I stumble upon the possibility of using my iPad to record vocals, even to use it as a vocal processor for the stage? Simple; I’m an app junkie and I’m always searching the app store for digital recording studios, vocal processor apps, and more. But, apps are the subject of another blog, which I’ll spit out in a few weeks.

Okay, back to the subject. Whilst on an app spending kick, I stumbled upon a really cool app for singers called VocaLive by IK MultiMedia. This app contained dozens of vocal effects from compression and EQ to Doubling and a harmony processor. I was in love! ALL the vocal effects I’d ever needed right on my iPad! I loved the app so much, that I went to IK’s website to see what all they had to offer. Imagine my surprise when they made a little keyboard for the iPhone, even a microphone. I bought them both…This was a few years ago. Their line has grown tremendously, which means so has my IK collection!

Today I use just about every piece of IK Multimedia hardware available and for different reasons. So let me tell you about a few of the toys in my setup: 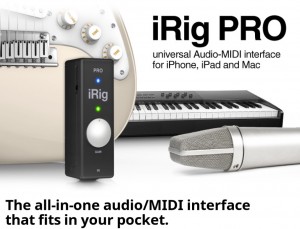 The iRig PRO is my staple. It functions as the interface from my microphone into the iPad. Without it, I’d not have a way to connect the two. In the beginning I had used the iRig Pre, which inserts into the headphone jack. But, the Pro offers better studio quality sound due to its lightning connector insert. IT also functions as an XLR, 1/4 jack, and MIDI interface. Now, IK Multimedia DOES make several stage and studio mics, but I am extremely loud, so I use a Studio Projects CS1 to handle my glass shattering wails:) For those of you just riffing on guitar, or tickling the ivories, they also make an iRig HD for 1/4 insert and iRig MIDI to hook your keyboard, drums machine, etc. directly into the iPad. But again, the iRig PRO handles all three. Now, I use it whenever I record vocals for songs or vocal programs, as well as when I want to use apps like VocaLive. 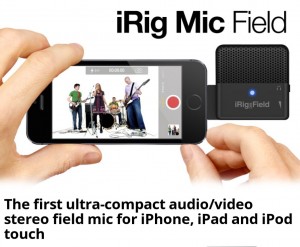 Speaking of microphones, I also use the iRig Mic Field microphone, but for different purposes. I use it in conjunction with my iPad or iPhone to record videos for Vendera Vocal Academy. Yes, you heard me right, I use an iPad and iPhone and iRig Mic to film videos for my online school. The quality is better than even the Flip Cameras from a few years ago. The quality of this little mic is even great enough to use for recording live music too. Check it out.

Now, what about keeping my iPhone secure and steady as I bounce around while recording vocal tracks? Yes, I do tend to dance as I sing. Luckily, I have iKlips for t 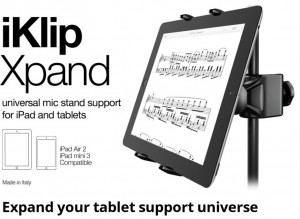 his purpose. I’ve tried different iPad/iPhone holder to secure my mobile devices, but none compared to the iKlips. These can connect  to your mic stand or clamp to other surfaces and will hold your mobile device without the worry of dropping it on the ground. When I record vocals, I literally have my iKlip connected to my Editor’s Keys Vocal Both Pro stand right below my mic. It has been by far the easiest way to record vocals. No more jumping over to the PC to stop/start the tracks. I just look down and tap my iPad! 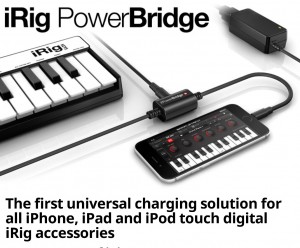 You might be saying, “I’d love to record on my iPad, but it runs out of power so quickly!”

Well, that’s covered too. After months of me whining and complaining, IK released the iRig PowerBridge, which allows you to run your IK devices such as the iRig PRO, while also keeping your iPad powered. Now, I am sure they had this idea long before I complained, but I’d like to think I hurried them along in the process:)

And, again, I also have 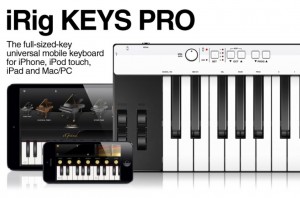 the need for keys, since I teach voice and also write keyboard parts for Vendera&Stith. That’s where the super portable iRig KEYS PRO comes in. Although small, it works fine for what I am doing. . It plugs right into your lightning connector. My only wish? They should make 61,76, and 88 key versions! 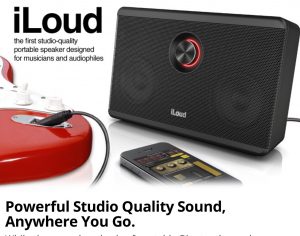 Okay, Jaime, what about “hearing” what you’re recording or playing? That’s where the iLoud comes into play. I am not lying, this is hands down the hottest little amp I’ve ever heard. I’d swear they hired BOSE to create it. Another company I LOVE and support is TC Helicon, and NO ONE compares to their vocal processors. Their VoiceLive3 Extreme, Mic Mechanic, virtually every pedal they’ve released is still superior, even to any apps. However, since I am being honest, I just got to say that the iLoud comes in place ahead of  TC Helicon’s newest monitor. Sorry, I LOVE the TC guys, but I cannot lie. The truth is the truth. 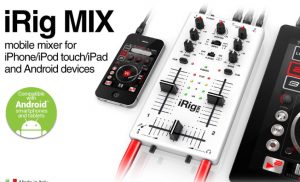 Last but not least, what if you’re a singer AND a guitar player or keyboard player? Well, the iRig MIX is the perfecrt portable mixer for you. Although created for DJs, this still is the ultimate little mixer for getting the perfect mix of vox to instrument.

FYI- I DO own all of these pieces of hardware and use every single one of them. They help me to record songs, film videos, and even rehearse with my songwriting partner, Scott Stith, and they CAN be used to create your stage setup for live performance. So, if you’re looking for a few pieces of gear to create your own vocal rig and not fully ready to jump the bandwagon to buying an expensive vocal processor, (and you have an Android, iPad, or iPhone) then you’ll want to check out the IK Multimedia line to build your perfect setup. Remember, take control of your own sound as a singer and build the rig that suits you best! Check them out at IKMultimedia.com.

Previous Post Is Jaime Vendera a Singer? Next Post How to Write a Book (Fiction or Non-Fiction) in Seven Days