Hello singers, it’s been a while since I’ve blogged about IK Multimedia. In truth, it’s not because I don’t still love the company. I just haven’t needed any new equipment for some time. Well, the time for new equipment is now, and I want to tell you about my latest purchase, the iRig Pro I/O, a portable audio/MIDI interface that allows you to connect any musical instrument, microphone, or MIDI device to your MAC, PC, iPhone/iPad, Android device, or tablet.

As most of you know, I’ve been an advocate for IK Multimedia products for years, even mentioning many IK products in my books. I currently use several IK products for recording, including iKlips, the iRig PRO, iRig KEYS & iRig KEYS Pro, as well as many IK apps, such as Sampletank and VocaLive. These products have made my life sooo much easier.

Before I tell you about my newest IK product, let me tell you how they’ve bettered my life.

For years I’ve hated recording on my PC because of fan noise and limitations as to where I could record in my home (having to be right by my PC). But what bothered me most was having to record by myself. Since I am so picky, this meant a lot of start/stops on a track, involving my running several feet from my microphone to the computer to hit STOP, restart the track, and then hit RECORD before running back to my mic. This was very irritating.

So, when I noticed that IK Multimedia was moving towards products for the mobile musician, a light went off in my head…

“I wonder if I could record a song on my iPad?”

Well, check out the music on my SoundCloud page and you tell me. (Pssst- these ARE iPad recorded songs.)

I’d discovered the next generation of recording, even when others told me I was crazy. But it made sense to me. Now I could attach my iPad to my mic stand by using an iKlip, turn on my ipad DAW, hit START/STOP with the simple touch of a finger, and move quicker with my recording process…Even better, my iPad produced NO NOISE, unlike my fan-spinning desktop.

I could also now record piano and string parts with portable keyboards designed for my iPad. If I recorded in my studio, I’d use my iRig KEYS PRO, and if I wanted to sit in my lounge chair, the smaller iRig KEYS was even easier. I could even take one of these compact MIDI controllers with me when I traveled around the world to teach voice.

All of these products allowed me to move from my PC to my iPad and even iPhone for multitrack recording. Again, many people laughed when I told them that I was using my iPad to record songs. They said it couldn’t be done with the processing power of an iPad. I found this ironic, considering that my iPad’s processor was faster than the PC I started with 20 years ago, loaded with 8gig of RAM and a Pentium II processor to run Cool Edit Pro, one of the earlier DAWs on the market.

Still, there were things that needed fixing in my mind. For one, I started with an iRig PRE, which inserted into iPad’s headphone jack, and then moved to an iRig PRO for better sound quality, via running digitally through the lightning jack instead of headphone jack. But, neither of these had the ability to charge my iPad while I was recording.

This was an issue for me, because I like to spend a lot of time on my Ipad, and those recording sessions only lasted as long as my iPad’s battery power. I complained to IK about my dilemma, and we even discussed some ideas, and they came through for me by creating the IK PowerBridge. This was a great product, but I thought that it would still be better if they had ONE piece of equipment that would allow me to interface my microphone with my iPad AND charge my iPad at the same time…

IK came through again with the iRig Pro I/O. I finally ordered one, and now I couldn’t be happier. This device serves all of my purposes. I could plug in a microphone, a guitar cable, even a MIDI keyboard AND charge my iPad AND retain sound quality that is superb, with no noticeable latency or noise issues during the recording process.

For me, this is the perfect portable interface with high definition 24-bit/96kHz audio plus MIDI interface with a professional quality preamp, phantom power, gain control, and headphone output with volume control. It is also a plus that the iRig PRO I/O can be powered multiple ways, including USB, or two AA batteries, or the optional iRig PSU 3A power cable.

Best of all, it easily fits in your pocket, and the interface cords are detachable, so you don’t have to worry about damaging a permanently connected cord. It even comes with hundreds of dollars of free software and apps….Not that was of benefit to me, but only because I’ve already bought them all, hahaha.

All in all, this is a permanent part of my recording rig, and now I no longer have to worry about my iPad losing juice. So, if you’re thinking about making the switch to mobile recording, check out the line of IK interfaces to choose the one that’s right for you.

Hey, you might even consider mobile gigging. That’s my next step, and now that IK Multimedia has released the iRig Stomp I/O and the iRig Keys 49 I/O, I am dying to get my hands on both of those amazing products, because combining the stombox with the ioS apps, Amplitube and VocaLive, will make an excellent live rig for any guitarist/singer.

As well, the iRig Keys 49 I/O solves many problems such as iPad powering and monitoring. However, those are two new stories for two new blog posts that I’ll hopefully share soon. I promise to post the moment I get my hnds on either of them:)

For now, I HIGHLY suggest you run out and buy yourself an iRig interface. Again, choose the one that is right for you. They have other versions, such as the DUO and the iRig PRE HD. But, for me, the iRig interface for me is the one pictured below: 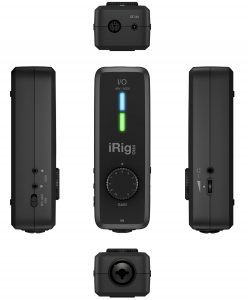 Now excuse me while I go finish up recording a new song and a new Extreme Scream product on my iPad with my iRig Pro;)

A Mobile Rig for Singers? (Part 1)

Previous Post Superior Sinus Health Next Post Are Your Fears and Doubts Preventing You From Achieving Musical Success?