I personally own a TON of IK Multimedia gear, using their products for recording, teaching, and other applications, so I always love to share their latest releases. The following is IK’s latest press release for an all new pedal board for smartphone and tablet owners…
IK Multimedia – the global leader in mobile music-creation apps and accessories – is proud to announce that iRig® BlueBoard, a groundbreaking new wireless MIDI pedalboard for iPhone, iPad, iPod touch and Mac, which gives guitarists, bassists, vocalists and keyboard players hands-free wireless control of mobile and Mac music apps, is now available from musical instrument and electronics retailers worldwide. 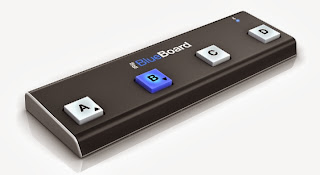 Hands free – cable free
iRig BlueBoard is the first wireless MIDI pedalboard for iPhone, iPad, iPod touch and Mac that uses Bluetooth technology to transmit MIDI messages to control app and software functions and features. Musicians can use iRig BlueBoard to control parameters in their favorite music making apps – such as stompbox effects on/off, preset patch-switching on the fly, volume or wah control, or any other MIDI controllable function. Set-up is as simple as turning on the power and launching the iRig BlueBoard companion app and assigning the backlit pads to the desired control function.
iRig BlueBoard uses Bluetooth 4.0 (LE – Low Energy) technology to transmit the actions of its four onboard, backlit footswitches and its two optional external devices to the mobile device or Mac. Then, using the iRig BlueBoard app (download from the App StoreSM) and software (download from the IK web site User Area), the Bluetooth signals are converted into MIDI messages and routed internally to the music app that’s running on the device.
The ultimate app control
Any music app or Mac music-software application that is MIDI compatible (the standard communication protocol for musical instruments) – such as IK’s AmpliTube, VocaLive, SampleTank, iLectric Piano, iGrand Piano – or any other Core-MIDI-compatible app like Apple’s GarageBand, can be controlled wirelessly. iRig BlueBoard is also expandable – musicians can add up to two standard additional expression pedals or footswitches via the unit’s two TRS 1/4″ expansion jacks, allowing for control of continuous rotary functions like wah effects, volume, EQ, gain control, etc.
For a guitarist or vocalist using a mobile multi-FX app like AmpliTube or VocaLive as a sound processor, iRig BlueBoard provides the foot-controlled functionality and convenience of a pedalboard, but with a form factor so compact and portable that it can easily slide into a backpack, a laptop bag or an instrument case. 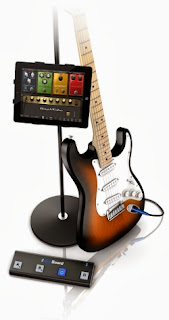 Because it’s wireless, iRig BlueBoard puts musicians on stage without being tethered to their mobile device. The unit’s range is 10 meters (over 32 feet), giving players a great deal of mobility to roam the stage that would be impossible with a wired unit. Because the footswitches are backlit, they’re easy to see in all lighting conditions, even on a dark stage.
The fact that iRig BlueBoard uses wireless Bluetooth leaves all the wired ports of the device free, so they can be used simultaneously by interfaces or controllers that feature the 30-pin or Lightning connector, like IK’s iRig PRO, iRig HD, iRig MIDI or iRig KEYS, and adapters or microphones that use the device mini-jack such as iRig, iRig PRE or iRig Mic.
Ultra compact, ultra portable
iRig BlueBoard is extremely compact, light and portable, measuring only 27 cm wide x 9 cm deep (10.6″ x 3.5″) and only 2 cm (0.8″) tall. It’s extremely lightweight, but with a sturdy, stageworthy chassis and four footswitches made of soft-touch rubber and designed for durability.
iRig BlueBoard is battery powered using 4 standard AAA batteries (included), and because it uses Bluetooth Low Energy (BLE), it draws very little power giving it extremely long battery life for extended operation.
iRig BlueBoard is compatible with iPhone 5 and 4S, iPad 3rd and 4th generation, iPad Mini, and iPod touch 5th generation. For Mac, it’s compatible with any model that supports Bluetooth 4.0 / Bluetooth Low Energy, like any MacBook Air, Mac Mini, or MacBook Pro that was released after June 2012.
As with other IK’s accessories, iRig BlueBoard is manufactured in Italy in IK’s own factory for the highest quality and reliability.
Pricing and availability
iRig BlueBoard is priced at $99.99 / €79.99 MSRP (excluding taxes), and is available now from IK’s network of music and electronic retailers around the world, and from the IK online store.