Are Your Fears and Doubts Preventing You From Achieving Musical Success? – JaimeVendera.com

Are Your Fears and Doubts Preventing You From Achieving Musical Success? 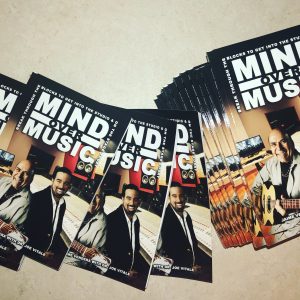 If the title of this blog post rings true, then my latest book, Mind over Music was written for you!

Mind over Music was born when my curiosity got the best of me. You see, my friend, Joe Vitale (The Secret, At Zero, Anything Is Possible) was never a musician, but he loved music so much that at the end of 2010, he decided he wanted to learn to sing, play guitar, write music, and release an album.

Three months later, he released his first full-length album of all original material.

I was intrigued. How could he possibly have accomplished this feat? I’ve had thousands of students since 1996, and some of the biggest complaints were about not accomplishing their musical goals. I heard the same stories from students, such as, “I really want to release my own record, but (insert excuse here)” or “I wish I were already playing gigs, but (insert another excuse here).”

So, I challenged Joe to write abook about how he accomplished this feat so that I could share it with all of my students who had amazing voices and great songwriting skills, but they weren’t showing the world their talents.

However, Joe had other plans…He challenged me to write this book.

Ironically, by the time I finished writing the book, and Joe had read the draft, he realized that our minds were very aligned. Joe, who was orignially planning to co-write the book with me, was so impressed with what I had written, that he decided it wasn’t broken, so he didn’t need to fix. Therefore, he simply wrote the foreward and the last chapter.

If you want to know more about Joe’s thoughts on this book, check out an interview with Joe (and myself) HERE.

The Mind Over Music method was created to help a musician overcome their fears and doubts, and to eliminate procrastinative habits, while turbo-charging musical creativity in order to help the musician accomplish their dreams and desires of performing and recording music.

Yes, a method finally exists to help get YOU onto the stage and into the studio achieving YOUR dreams without any further excuses.

Is Falsetto Bad for Your Voice?!?