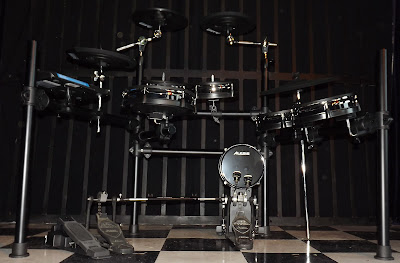 I’m a long-time user of Alesis products, including ADATs, 3630 compressors, monitors and the QS Keyboard line. Recently, I received an endorsement from Alesis, which is an honor. Considering I already had the equipment I needed mixers such as the Multimix and IO series, they offered to expand the endorsement to include my drummer, Tim Odle to sample the DM-10 studio drum set. Tim, being a life-long acoustic player was sure to have his hands full. So, after a few months of banging away on the electronic skins, I’ve decided to interview Tim to get the pros and cons of the Alesis electronic drum line right out of the box. Here goes:

Jaime: When you pulled the DM-10s out of the box, I’m betting you felt like you were putting together a jigsaw puzzle, haha.
Tim: Haha, yes, you could say that. Honestly, it wasn’t that bad. It takes a little time to build the rack and mount the drums before you get to have any fun. So, for all you new DM-10 users, be patient. You can’t expect Alesis to put it together for you. If they did, the box would be five times as large, haha. 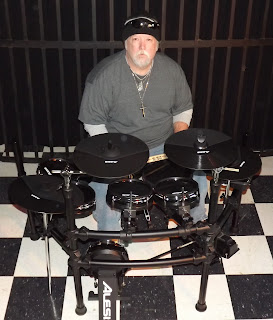 Jaime: All jokes aside, after you built the drum rack, and got to play with the kit, what did you think?
Tim: I thought there were some very interesting sounds and some really unique sounding kits. I was most impressed with the old school sounds like the electronic 80s sound used by bands like the Cars. Overall, there’s a great sound spread throughout the kits, which would let a drummer play anything from rock to pop to metal to country. Considering I’m not only a full-time gigging musician, but also write originals, for me to get precisely the sounds I want, I’ll need to develop my own personal kit. Luckily, with the DM-10 you can customize your own kits, so I’ll be good to go once this acoustic drummer gets over the learning curve of digital drums, haha. I can say I loved the kit labeled, “Super Kick”. It has one of the best bass drum sounds on the Alesis or anywhere for that matter. I’ll definitely be using that bass drum sample to get that big Bonham sound.

Jaime: So, were there any crazy sounds on the kits?
Tim: Sure were. Like I said, there were some of the old school electronic sounds, made popular by bands like the Cars. I even heard some of the newer hip hop sounds. The sounds are so versatile that the electronica sounds could be used for covers of old-school Prince as well as Rob Zombie.

Jaime: I’ve seen some amazing performances on YouTube featuring electronic Alesis kits, and I had a chance to play one myself at the Australian International Music Show in 2010. The one thing I noticed were those tiny little heads. As an acoustic drummer, how do you feel about the smaller drum heads?
Tim: I think they are a great training tool for drummers. For me, I noticed that it helps my stick control; making sure to hit the drum as close to center as possible instead of on the rim.

Jaime: So, I see how they could improve your playing. What about playability? Are they accurate with rolls, double bass, etc., or are they affected by such things as cross talk like the drums kits of the 80s and early 90s?
Tim: I’m not going to lie. Cross talk was a problem, and trying to set sensitivity wasn’t much better. When I attempted to fix the cross talk issue, it affected the sensitivity per each pad and limited the way I could play it all as one kit. I’ve discovered that if you limit the sensitivity of a pad, it limits the response. If I take the sensitivity up too high and I am doing say 16th notes on the bass drum and doing two and four on the snare, I have no snare. It seems like the bass drum is cancelling out the snare. Then if I level it all out, it could eliminate the snare.   If a kid who has never drummed before started with electronic drums, it could give them a false assumption that it’s a little more difficult keeping a beat, simply because of sample sounds dropping out. Luckily, Alesis stepped end to help out with these issues and provided the following info:

Here’s some sensitivity settings when your global trigger settings is on normal, which it will be unless you changed it.

They also provided the following on crosstalk with the DM10:

To start, make sure you have your cross talk settings on all triggers set to zero. Adjusting nothing but Threshold settings, go through each trigger adjusting the threshold up as far as you can live with. You will still hear cross talk between triggers, but you should notice that is has been diminished.

Now we can go in and adjust the Xtalk Send and Receive at each trigger. Again, use these settings very sparingly. You should never go above a setting of 4 or 5. Anymore than that will cause drop out issues. This portions is a little bit of trial and error. You can try adjusting the Xtalk receive first on all the trigger you hear as cross talk, but make sure you are on that trigger. Meaning, if you hit tom#1 and hear a crash sound. Go to the crash trigger settings and adjust the xtalk receive from there. Again, don’t go past xtalk settings of 4 or 5. If you are at 5 and still get a little cross talk, then go and adjust the xtalk send for the trigger that you are hitting. Meaning if you hit Tom#1 and the crash sounds just a little adjust the xtalk send of Tom#1. At this point your cross talk should be 95% or more gone. If you are still getting cross talk at this point, you should start looking at other options such as a snare stand and a stand for your hi-hat. Maybe even stuffing your rack tubes with foam.

Remember the sticks you use and how hard you play can affect your crosstalk.

Jaime:  Great, I am sure this information will help others. Do you have any suggestions from your personal experience on tweaking the DM-10?
Tim: Lots of patience and a few hours spent watching YouTube videos, haha. Novice to electronics such as myself or say a guitar player wanting to record his own drum tracks, would have difficulty setting these up straight out of the box. Spending time with patches based on sensitivity and cross talk is of utmost importance in my opinion. I’d also like to see a more in-depth user guide. This could help the DM-10 user master the kit much quicker.

Jaime: Tim, you’ve played acoustic drums for over thirty years. How does it switching from acoustic to electronic, even if for simple practice sessions.
Tim: Honestly, it was nice that the Mylar heads were much quieter than a regular kit, so the big bonus is the sound reduction, which I’m sure makes my wife happy, haha.

Jaime: So, they would make the perfect set for say, some kid living in Hollywood in an apartment where the deafening sounds of an acoustic set would result in a visit from the cops?
Tim: Very much so. In fact, our bass player, Keith Gilbert, who was your drummer in LA, commented on this very thing. Even in Hollywood in your apartment, he couldn’t practice. Even buying rubber head covers to deafen the sound wasn’t good enough. Sound reduction is always a problem for a practicing drummer. If you plan to live some place where noise is an issue, and you can afford a set of DM-10s, it would be a great investment. You may even master the technology quicker than an old-schooler like me and turn your DM-10 to your main kit.

Jaime: Still, they must make some noise?
Tim: They’re Mylar heads so there’s still some contact noise. I’m not sure what difference the mesh head upgrades would make but they’d still have to be quieter. The cymbals that come with this kit are virtually silent. I haven’t tried the brass cymbals Alesis makes, but I’m willing to take a crack at them…that is, if anyone from Alesis is reading this interview, hint hint, haha.

Jaime: So, are you ready to make them you main kit?

Tim: I’ve done one better. I’ve combined the DM-10 with my regular kit. This is great for me to sample a variety of sounds, or switch over to a DM pad when a song calls for a piccolo snare, use the bass pad for a bigger bass drum sound, etc. The rack was also perfect for mounting some of my brass cymbals and cowbell. 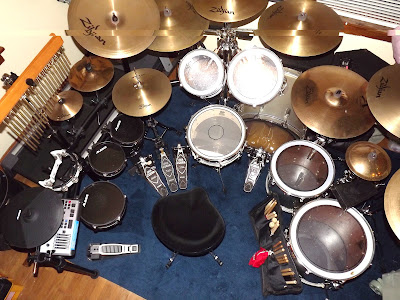 Jaime: Recording wise, would you think with sensitivity/cross talk issues adjusted, they’d make for a great alternative for the small studio engineer?
Tim: Absolutely. You have several choices. You can go midi, which would allow you to try tons of different sounds as you start mixing the song, or you could simply record the drum samples during the live take. I guarantee the sounds will sound amazing.

Jaime: The DM-10 brain is no longer a rack mount, like some of the earlier D models. While it’s nice that the DM-10 brain mounts to the rack, some may wish it were a half or full rack with the option to mount to the drum mount or to be placed in an actual rack off to the side of the stage. What are your thoughts on this?
Tim: Perhaps Alesis could provide an option for either choice so the drummer could choose what works best for them. Someone like me that’s mainly an acoustic drummer and owns a rack full of my own devices, including compressors, EQs and effects, who would like to trigger my drums using the DM10 would much prefer a rack mountable unit.

Jaime: What did you think about the high hat pedal?
Tim:  I’ve noticed that with the high hat pedal it’s either open or it’s closed, which may not work in the real world. But again, I am still learning so there may be a way around this. It would be nice if the DM-10 manual focused more on tweaking the module instead of how to use the accompaniment tracks, like bass lines which allow a drummer to practice grooves. Don’t get me wrong, the accompaniment is cool for practicing drummers, but I want to know every in and out of this system. But, like any other piece of electronic equipment, that comes with hands on use. All in all, I love the sounds and the feel of this system, and the nit-pick tweaking is just an individual thing that each different style drummer will have to master themselves.

Jaime: Any last thoughts?
Tim: If you’re an acoustic drummer, who wishes to expand into the digital workd, you can get the best of both worlds, like I have, by using an acoustic bass drum, snare and high hat worked in with the rack. This has been nice for me for practice on the Vendera songs where I’m playing some funky rock beats. I think they’d be amazing on acoustics with triggers in our live situations, fun in the studio for recording and good for practice with my mixed kit idea to conserve space in the practice room, eliminating some noise, as well as honing your chops with precision hits in the center of the small drum heads. 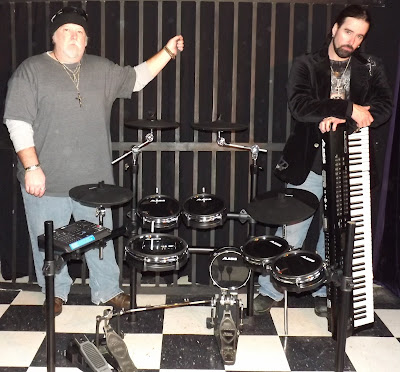 *Learn more about the DM-10 series at Alesis.com*

What gear do you need to teach music online?